The “Karma Condo” construction workers at 21 Grenville Street are still at it: teasing, name calling, whistling, gawking and tormenting people who live in the neighbourhood. They don’t pick on everyone mind you, just the meek, overtly gay or visibly out. Take Enza Anderson, she’s been directly battling these bullies for over two years and the situation is not much better. Condos are going up at a rapid pace in this city and developers need workers but at what price? There is no excuse for hiring people who think it’s okay be an asshole while on the job and when complaints are filled why aren’t these men dealt with swiftly and harshly? Probably because these complaints are being made to people who value money over neighbourhoods.

Complaints to SkyGrid Construction, meetings with Centre Court Developments and police complaints have resulted in little progress. There’s some bad karma growing at Yonge and Grenville, so we’ve started a poster campaign to let them know what unwanted attention can feel like. 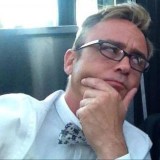